If you haven’t had a chance to read the previous post ~ Part 1 ~ “Are we there yet”, please do so before you continue below.

Setting off again at 6.00am on Easter Sunday morning (with less than 4 hours sleep) I was not a happy camper.  So tired in fact that I didn’t hear a sound from behind my seat for several hours into the trip.  (Thankfully the cat stayed in SYD with my parents and we did not have an extra passenger).

Our destination today had two essential stops; the first Wingham and the final one Dorrigo. 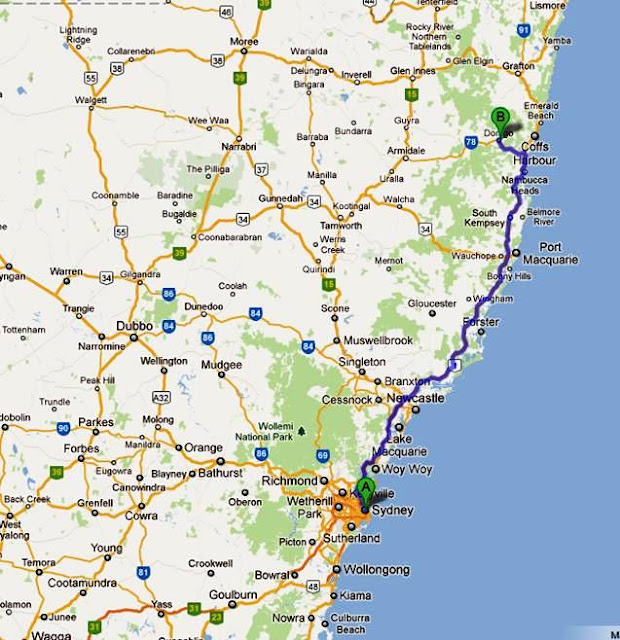 To Wingham it’s about a 4 hour drive (that is without stopping – and no “I need to go to the toilet” stops either). Hubby drove all the way (I was still way too tired). At Wingham lives my children’s great aunt and uncle (hubbies aunt and uncle) who we haven’t seen for at least 5 years.  It is here (as the kids scrambled out of the car) that I noticed they had been given a secret stash of Kit Kat chocolates (from their Nonna) hidden in their carry on backpacks – the traces of smeared melted chocolate was on my 3yr olds face and all over the boys and younger daughters clothes (thanks mum).

It was a nice stop off for Easter Sunday lunch; a time to unwind, relax and practically make ourselves at home. We had family photos and couple of glasses of wine (well I did), the children had a play, watched a movie and relaxed before the next leg of the trip.  We didn’t get away until after 4.00pm and knew we would not get to Dorrigo until it after dark.

Hubby again drove (I was still too tired and too many vino’s for me).  This second leg of the drive seemed to take forever, not forgetting to mention the continuous fighting and squabbling from the back of the van.  Seating had to be reshuffled constantly.

Stopping along the way, we pulled into a FREE DRIVER REVIVER stop.  These rest stops are community based and operated by volunteers. There were plenty in NSW along the Pacific Highway,however along the Hume Highway going through VIC there were hardly any at all. Perhaps NSW care more for their holiday drivers.

Free coffee/tea/hot chocolates are given along with biscuits and small gifts for the kids. They each got a pack of NAVMAN MYSPY cards . 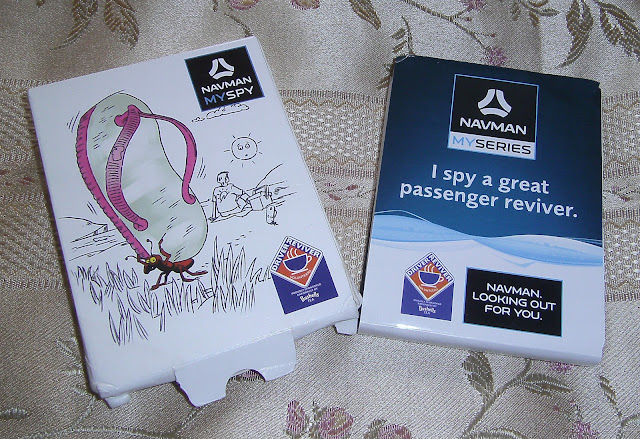 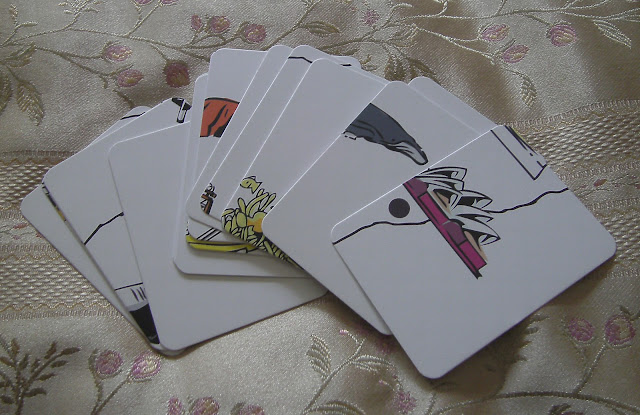 A puzzle on the back to assemble 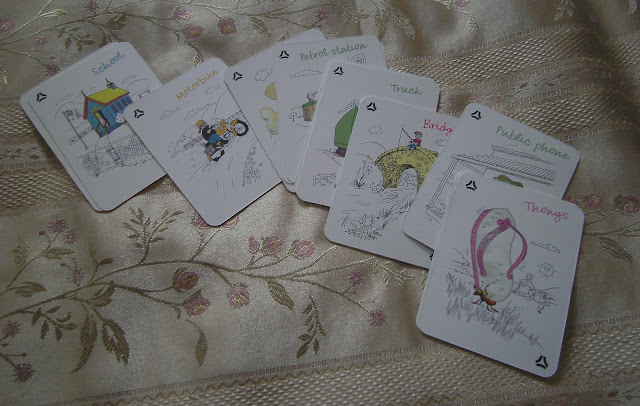 I spy with my little eye……(although after a while they got bored with the game and some of the cards ended up all over the floor of the van).

Stopping at these places also gives the volunteers something to talk about (a jaw dropping effect too) “you have SEVEN children, wow how do you cope, I find my two a handful” etc.

Continuing along the road, we had a few more re-fuel stops and toilet breaks here and there.  The worse part of the drive was yet to come….

Thankfully none of my kids have car sickness and they all travel well.  For myself however; if I read a book for too long, drawer or do something with my head down, I get VERY nauseas.   Even winding roads effect me ~ especially high ones with cliff faces.

Dorrigo Mountain ~ Waterfall Way is one of these winding cliff face roads.  The view is spectacular (if you dare to look down), however for me this is torture.

It’s about a 40 minute drive from Bellingen to Dorrigo (in a car), it’s narrow and in some places (where the waterfalls are) only one car can pass.  In places there have been landslides and several areas where the road needs fixing.

The video below will give you an idea of the road.  Just watching the view from the guys bike makes me squeamish too.


Going up the mountain I was ill and had to close my eyes, direct the air-con to my face and wish it was all over.  We were also going up in darkness too, so the headlights on the road were enough for me.

We got to our destination around 8.30pm arriving at hubbies parents (Opa & Oma’s house).  First the car was unpacked, followed by a cooked meal then baths and showers for the kids (the removal of those chocolate stains).  Followed by a bit of a play and bed!

Dorrigo is a very small town – no shopping centres, no high classed restaurants, no cinemas etc. The kids had a ball though, riding go-carts down the grandparents driveway; playing outside and climbing trees. They even went bush walking and to some waterfalls in the area ~ Crystal Waterfall and Dangar Falls. 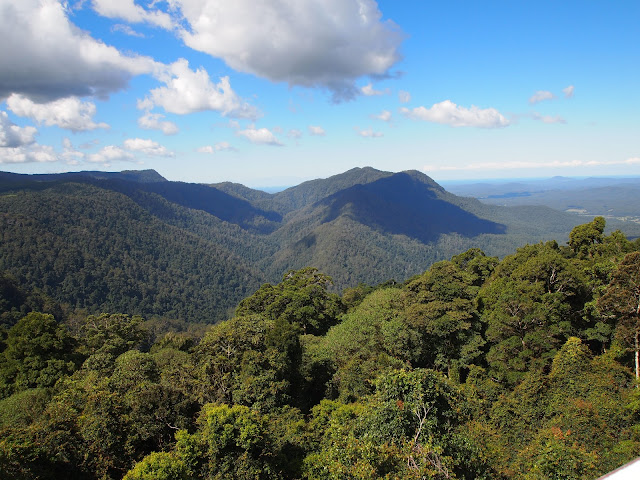 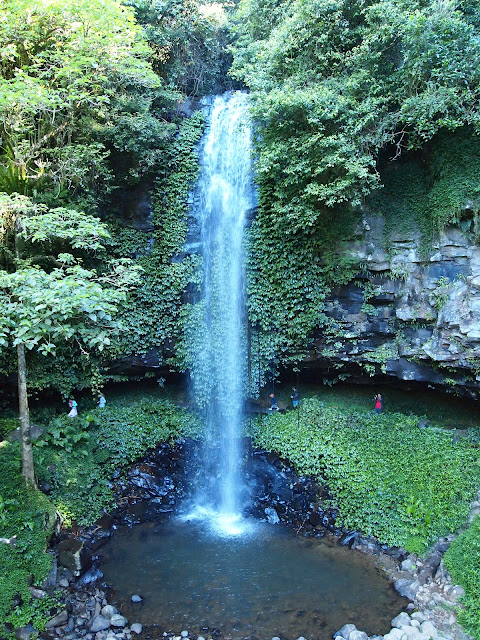 We were there for 4 days, went for walks into town (for coffee), hubby and I had a pub meal one night at the Bistro, however the thought of the drive home was clear in the mind. 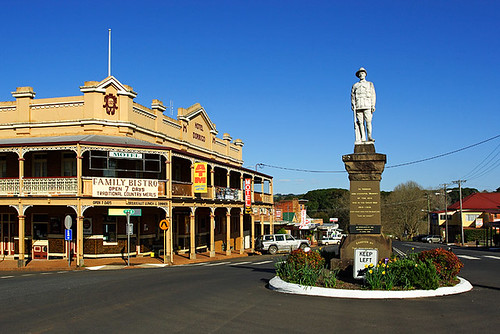 The day before we left, we made another trip down the mountain with the grandparents to visit a family farm not far from Coffs Harbour. 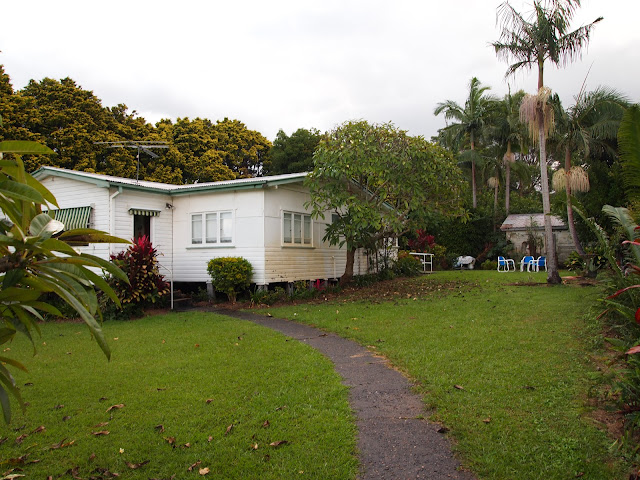 Again I was ill in the car (this time I sat in the back of the bus ~ luckily I always carry a fan with me in my hand bag and used this to fend off the nausea).

At the farm house (which was the late Great Grandmothers);  the children had a fancy dress pageant  (with the grandmothers old clothes, HATS and shoes), explored the house and grounds and then had rides on the old golf cart (our 13yr old daughters first solo drive)!

The next day (Friday morning), we left around 8.00am; this drive was relatively easy (except for going down the mountain again).  I also shared with some of the driving back to SYD (my parents). We had left a lot of things behind (including the cat) that needed to be picked up.  We also needed a stop over rest before the final stretch home to VIC.

When I visit my mum, I never leave empty handed and always take things home with me.  I thought our van was packed full when we left home, however, it was so full on the way back that you could not see out the back windscreen. 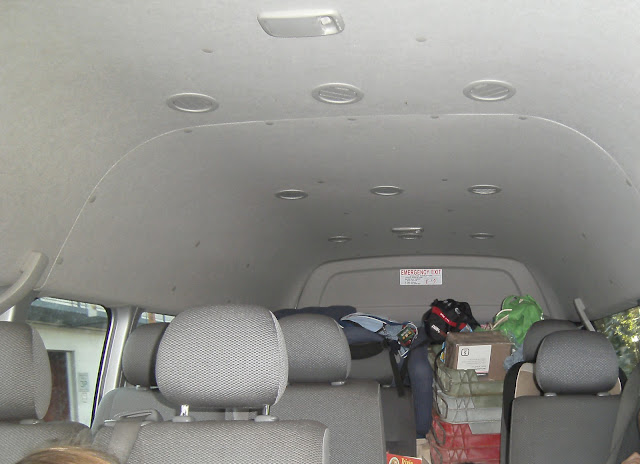 By 6.00am, we were on the road again.  Hubby did the first lot of driving and I took the wheel somewhere before Gundagai.  We stopped for lunch at Holbrook again and I continued to drive most of way home.  I think hubby took over somewhere in there though, however I did drive until we got to the outskirts of Melbourne and then hubby took us the rest of the way.

Hubby on the other hand likes to take a ‘short cut’ around the city, but instead he we got ourselves lost.  Our GPS charger was broken and we ended up in Burke Street.  A child needed a toilet stop, so out we all piled leaving one in the car to look after the cat, who by this stage was worn out from car travel too. 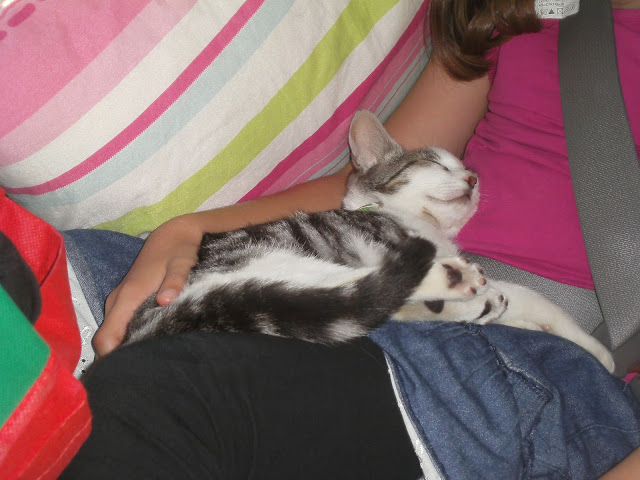 It was obvious that this part of Melbourne had never seen a big family before.  We found toilets in a designer store and the two staff members (although very nice) were amazed with the children and how many there were.  A craft store we went into also had to do a head count; I left the store first so hubby could deal with the comments (this staff member though was one of 8, so it wasn’t so bad).

What I really wanted to do though, was walk across the road to Laura Ashley, BUT we had no time ~ and it was close to closing time 5.00pm.

Finding our way back to the free-way, hubby decided to pull into La Porchetta for dinner (no cooking, no dishes); the cat was given her food and water and left to roam the van alone.  She was very good though and was found sitting quietly on a seat waiting.

We got home around 7.30pm.  Again the car was emptied; baths got under way and the little boys put to bed instantly.

As for myself, I had to get stuck into the laundry.  The very morning we left a child had wet their bed.  Of course I could do nothing about it but remove the bedding. This had been sitting in the laundry for over a week (yeah I know, gross). I managed to do 3 loads of washing and hung some out as it was a warm night.

I also had to clean the main bathroom as it stunk and was filthy (we had visitors coming the next day).  By the time I finished all these chores, it was around 10.00pm. This is when I GOT TO RELAX, too late for coffee mind you (I wanted to sleep). So there you have it; maybe I should have made the title of this post: Travelling with kids, a driving holiday for the whole family…something everyone should experience (NOT) in their life time.

Perhaps next time……….hmm……..actually, I am not sure I want a next time for quite a while.