| No Comments
Today is the 6th January and the “Epiphany”.
Here is a little song for today….. and you can’t beat Hugh Jackman either.

The Season of Epiphany

Dennis Bratcher
In western Christian tradition, January 6 is celebrated as Epiphany. It goes by other names in various church traditions.  In Hispanic and Latin culture, as well as some places in Europe, it is known as Three Kings’ Day(Span: el Dia de los Tres Reyes, la Fiesta de Reyes, or el Dia de los Reyes Magos; Dutch: Driekoningendag). Because of differences in church calendars, mainly between the Eastern Orthodox and the western Catholic and Protestant traditions, both Christmas and Epiphany have been observed at different times in the past.  Today, most of the Eastern Orthodox traditions follow the western church calendar. The exceptions are some Greek Orthodox Churches and related traditions (for example, Russian and Serbian Orthodox) that still follow the older calendar and celebrate Epiphany as the Theophany on January 19th. -1-
Epiphany is the climax of the Advent/Christmas Season and the Twelve Days of Christmas, which are usually counted from the evening of December 25th until the morning of January 6th, which is the Twelfth Day. In following this older custom of counting the days beginning at sundown, the evening of January 5th is the Twelfth Night. This is an occasion for feasting in some cultures, including the baking of a special King’s Cake as part of the festivities of Epiphany (a King’s Cake is part of the observance of Mardi Gras in French Catholic culture of the Southern USA).
In some church traditions, only the full days are counted so that January 5th is the Eleventh Day of Christmas, January 6th is the Twelfth Day, and the evening of January 6th is counted as the Twelfth Night.
In traditional Christian churches Christmas, as well as Easter, is celebrated as a period of time, a season of the church year, rather than just a day. The Season of the Church Year associated with Christmas actually begins with the first Sunday of Advent, four Sundays before Christmas Day.  Advent is marked by expectation and anticipation in preparing to celebrate the coming of Jesus.  Christmas begins with Christmas Day December 25 and lasts forTwelve Days until Epiphany, January 6, which looks ahead to the mission of the church to the world in light of the Nativity. The one or two Sundays between Christmas Day and Epiphany are sometimes called Christmastide. 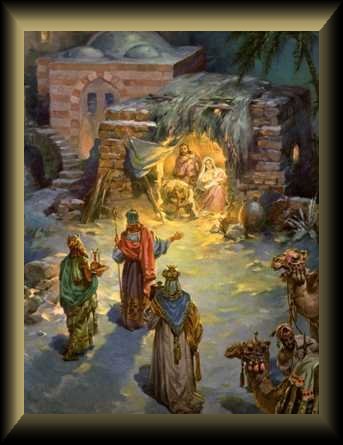 For many Protestant church traditions, the season of Epiphany extends from January 6th until Ash Wednesday, which begins the season ofLent leading to Easter.  Depending on the timing of Easter, this longer period of Epiphany includes from four to nine Sundays.  Other traditions, especially the Roman Catholic tradition, observe Epiphany as a single day, with the Sundays following Epiphany counted as Ordinary Time. In some western traditions, the last Sunday of Epiphany is celebrated as Transfiguration Sunday.
The term epiphany means “to show” or “to make known” or even “to reveal.” In Western churches, it remembers the coming of the wise men bringing gifts to visit the Christ child, who by so doing “reveal” Jesus to the world as Lord and King. In some Central and South American countries influenced by Catholic tradition, Three Kings’ Day, or the night before, is the time for opening Christmas presents. In some eastern churches, Epiphany or the Theophany commemorates Jesus’ baptism, with the visit of the Magi linked to Christmas. In some churches the day is celebrated as Christmas, with Epiphany/Theophany occurring on January 19th.
{information & image credit}
Categories: Christmas, Flicks Friday