For the past 4 plus weeks it has been “book week” in this house.  The idea of it is fantastic, however, when the whole primary school and EVERY grade get involved it’s more work for me to handle.

Our theme was based on Ancient Rome.  Each class had to either do a cardboard project or a model and find an outfit to wear  (not sure if they actually studied a particular book though)!
When you have 5 kids at school and four in primary…..”book week” turned into Book Month.  I don’t even think half of them actually looked at a Roman book over this period anyway.
Grade 1 Boy – 6yrs – student HAD to have a helmet…”I gotta mum” and an outfit.  Well, after searching online, all were very hard to make and most required hours of work.  So even hubby thought of making it.  (this is the one Boy 6 wanted)
Online Cardboard Box Roman Helmet
But unfortunately, Grade 1 boy only told us about this a week before (of course), so luckily he picked up an outfit from school (they have a fancy dress shop) and he managed to scam a paper mache helmet from a former family friend/border/big sister (school teacher) who is working at the school.  (Her students made some in class and I think my boy got the left over one….THANK YOU dear teacher – friend 😉
Grade 2 Girl – 8yrs – student had to do a cardboard project on a Catholic Saint from Roman days, this was also another last minute thing…(had 3 days to do).  Thank goodness, my eldest daughter took over and helped with the information (dictation and spelling mistakes).  She also was meant to dress up…..but that didn’t happen.
Grade 4 Girl -10yrs – she had to make a full-on Ancient Roman model (luckily we started this during the last school holidays…perhaps I should re phrase WE to I).
Coming up with the idea in the first place was very difficult; “what do you want to make Girl 10″……”I dunno”.   How many 10 year olds can just whip up a model from nothing?
So in the end, mummy had the thoughts, design and creativity in the head; mummy went out and bought all the supplies; mummy did all the hard stuff.  My daughter did do some gluing and colouring and painting….but only with guidance and me telling her where to stick etc.  As I said, this took weeks and weeks…..
CHARIOT RACING IN THE COLOSSEUM 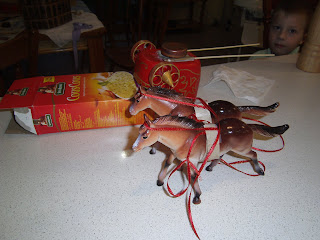 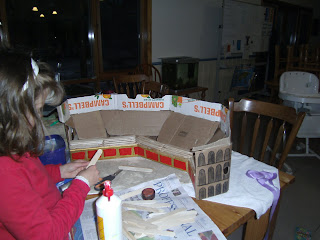 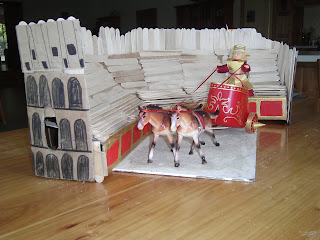 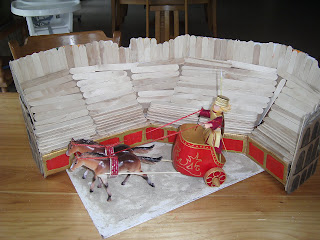 But wait…there’s more….she also had to do a cardboard project on her model theme – COLOSSEUM.  We have World Encyclopaedias, however, there was not much info in them, so then mummy had to find the info online, print it out and help her with this too.  (I don’t allow my kids on the computer/Internet full stop).
Then….she had to also find a costume…..because they were having a best dressed award….*sigh*, luckily I found something I made years ago (from and old costume party), so we hitched it up with safety pins and it worked well….the Roman’s wore baggy sheet looking dresses anyway.
Grade 5 Girl – 11ys – Also needed an outfit and spent the last 4 weeks searching and dressing and making herself look fantastic…all for a period 2 hrs.  She also had to do a cardboard project.
So, after all these many weeks of preparations – up to school I went (late mind you) to see the 4 weeks worth of stress and mayhem that evolved around our happy home….when I got there..I was a little disappointed, not much organisation, the kids were running around all over the place dressed in all sorts of things……class rooms were in a mess etc (perhaps it was because I arrived late).
Anyway, that’s my complaint for the day…. and although it seems like I may have broken my rule above “NO EXCUSES, Easy Organising for Large Families”, I still managed to stay sane and got through the work load.

BUT, PLEASE teachers for next year…. remember those of us with lots of kids.. all those kids (from one family) only have ONE mum and God didn’t give her 8 arms like he gave an octopus!